With voting behind us, the hard work of eradicating systemic poverty lies before us 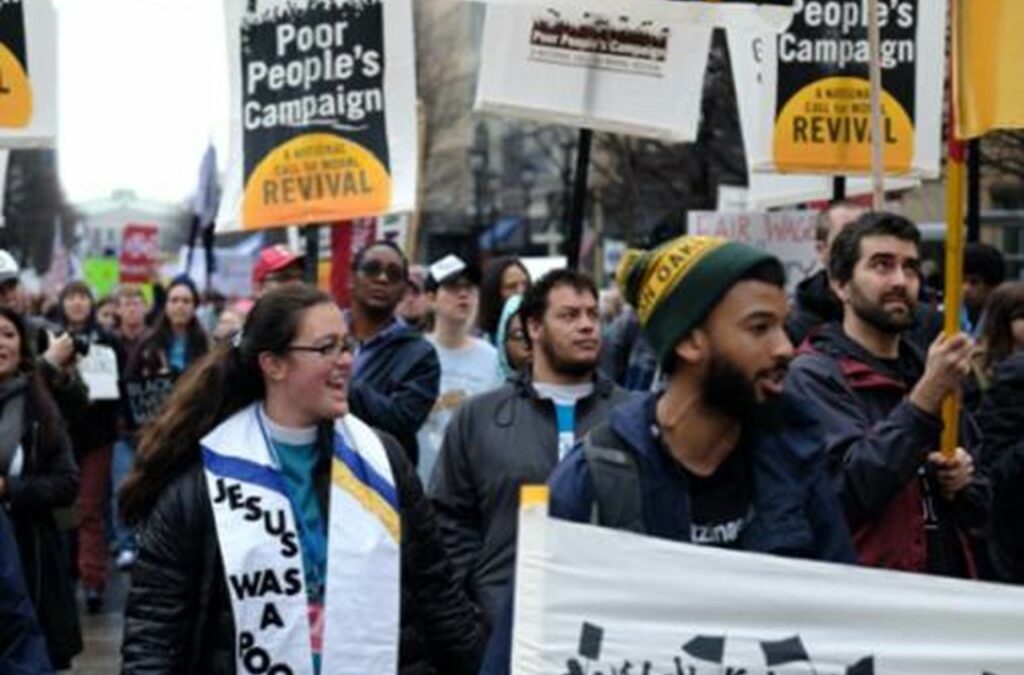 LOUISVILLE — The co-chairs of the Poor People’s Campaign delivered this post-election message during an online event Thursday: Now that voters have turned out in record numbers to cast their ballot, the real work of advocating and caring for the 140 million Americans who are poor and low income must begin in earnest, no matter who sits in the Oval Office or walks the halls of Congress and the nation’s 50 statehouses.

“We know we are having an impact,” said the Rev. Dr. Liz Theoharis, a Presbyterian pastor and, along with the Rev. Dr. William Barber II, Poor People’s Campaign co-chair. “We have reached out to 2.3 million poor and low-income people.” Hundreds of thousands of them voted this week, she said, some for the first time in 12 years or more.

“This happened in key states, and it helped determine election outcomes,” Theoharis said. “We’ve raised issues of racism and systemic poverty, ecological devastation, the war economy and the false narrative of Christian nationalism.”

“When their needs are put on the agenda,” Theoharis said of poor and low-income Americans, “the people respond.”

The Poor People’s Campaign: A National Call for Moral Revival, as it’s formally known, continues the work begun in 1968 by the Rev. Dr. Martin Luther King Jr. and many others to build a broad movement that could unite poor and impacted communities across the country. In June, the 224th General Assembly of the Presbyterian Church (U.S.A.) took time during its virtual assembly to participate in a Poor People’s Campaign event.

“Our pressing issues aren’t red or blue issues,” Barber said Thursday. “They are moral issues. This election has revealed that while extremism is still strong, our fusion coalition shows the possibility of genuine democracy is stronger still.”

“Our task,” Barber said, “is to build an America that works for all of us.”

Poverty and racism have combined to make the effects of the COVID-19 pandemic much worse, Barber said. But “in the face of this painful reality, Americans are increasingly supporting policies that address poverty.” Seven in 10 Americans now support raising the nation’s $7.25 per hour minimum wage, including 6 in 10 Republicans, he said. Universal access to health care through Medicaid expansion “continues to remain popular,” Barber said.

“Ending poverty is the moral issue that can and must unite us all,” Barber said.

An older white man and a Black woman with roots in India have received more than 72 million votes for president and vice-president in the midst of a pandemic, Barber noted — without “fully endorsing the Poor People’s Campaign agenda.”

“What if,” he wondered, “when they govern they truly desire to address poverty?”

Now that so many people have voted, Barber urged them to remain engaged.

“We aren’t going to let Congress just sit there,” he said. “We are called to be a movement, and because you moved in this election, you are going to see the very beginnings of a third Reconstruction. That’s your work. Now we’ve got to stay at it.”

“Forward together,” he said, alluding to the Poor People’s Campaign, “and not one step back!”

In addition to the nearly 250,000 Americans who have died from COVID-19 complications, Theoharis said a similar number of people die each year because of poverty.

“This nation boasts of being the wealthiest in the world, but half our children live in food insecure homes,” Theoharis said, “and the pandemic has made these problems even worse.”

In Michigan, her mother’s home state, and in Wisconsin, where Theoharis is from, “we saw that poor and low-income people were able to turn out in large numbers and vote for life rather than death.”

Media reports showed people standing in long lines waiting to vote. “People made signs to direct voters where to go, provided them snacks and sustenance and made sure that every vote counted,” Theoharis said. “We know folks want health care, social programs that lift from the bottom, a free coronavirus vaccine and a just stimulus [package]. We are now in 45 states, and we will stay focused until we have all that everybody needs to thrive, and not barely survive.”

Whenever the nation has faced what Theoharis called “forces of regression,” movements have arisen “to call us to higher ground,” including abolitionists and the women’s suffrage proponents.

“We will continue to unite people that those in power want to keep divided,” Theoharis said. “The fusion movement is the hope of this society.”

“When we lift, organize and build power from the bottom, everyone can rise,” Theoharis said. “We will rise and we will keep on rising, mobilizing and organizing — and we will move forward together, not one step back!”